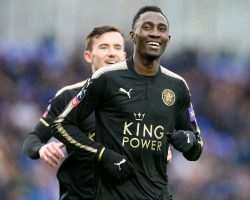 Super Eagles midfielder, Wilfred Ndidi, has revealed the characters of some Nigeria players at the 2019 Africa Cup of Nations.

The Leicester City's player described some of his teammates as silly, funny and nice in an interview with his club's website.

He said the 2019 AFCON made the Nigerian stars know each other better as well as build a stronger bond.

He said, “There are a lot of characters in the national team – some are funny, some are silly. They're a good bunch of guys. The funniest has to be John Ogu. He's a big guy and he's among the senior guys.

“From the first day we started at the training camp, I roomed with Moses Simon, who plays in Spain. I've always known him because we played for the Under-20s together. He's quite loud, but he's a cool guy.”

Ndidi also said he grew up idolising Mikel Obi, describing the opportunity to play alongside the retired Eagles midfielder in the national team as a great memory.

“Growing up, I saw John Obi Mikel at Chelsea and I always liked him,” said Ndidi.

“I've met him and played with him. My first feeling, when I came to the national team, the first time I saw him, it was my debut in the qualifiers and I actually came on for him. It was a great memory for me.

“Being in the training camp with him, he's a lovely guy and he's great with everyone. He's a great captain for the team.”

According to him, the Super Eagles coped well in soaring temperatures at 2019 AFCON because a majority of them were brought up in Nigeria.

Nigeria advanced to the semi-finals after a stunning comeback triumph over Cameroon and a last-minute win against South Africa.

However, after levelling late on against Algeria in the last-four, former Fox Riyad Mahrez scored a stunning 95th-minute free-kick to deny Nigeria a spot in the final.

“It was almost the same climate as Nigeria, so it wasn't too difficult for us,” he said.

“Some players have played in Europe since they were young, but for us, we grew up in Nigeria so we're used to the weather. As a group, we worked together.”

He regretted that the team could not lift the 2019 AFCON, but said they learnt a lot from the competition.

“The aim was to go to the final, but for Riyad!” said the midfielder. “But we will take it, because losing the semi-final and going for the top place, we had no other option than to take third.

“That's better than coming out with nothing. We learnt a lot. Nobody believed in the team to actually go that far. We got to the semi-finals, and people started to see how well the team can play.”