Dybala's transfer to Tottenham called off 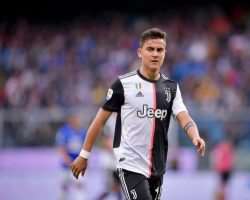 Paulo Dybala is not heading to Tottenham Hotspur.
The Argentine playmaker looked set to join Spurs from Juventus for $78 million on transfer deadline day but the 25-year-old has seen another move to the Premier League breakdown.

Sky Italy are saying that Juve will not allow him to leave as they haven't got a replacement for him lined up, while other reports suggest the deal is too complicated for Spurs to complete due to image rights.

[ STREAM: Every PL match live ]
Dybala was included in a possible swap deal to Manchester United with Romelu Lukaku heading to Juve but that broke down due to his wage demands, his agents' fee and over image rights. It appears he will now stay in Italy.

Spurs are on the hunt for a playmaker with Giovani Lo Celso and Philippe Coutinho both linked with a move to Mauricio Pochettino's side, and it appears Lo Celso is likely to join with Dybala and Coutinho not heading to White Hart Lane.

Given Christian Eriksen's intentions to move on before the end of the European window closing in September, Spurs are desperate to replace the Danish wizard. The clock is ticking for Daniel Levy to get a deal done