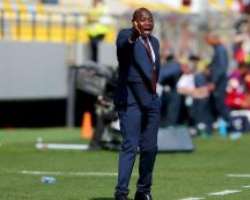 Emmanuel Amunike’s contract with the Tanzania Football federation has been terminated.

TFF and the ex-Nigeria International reached a mutual agreement to part ways following a dysmal performance at the ongoing African Cup of Nations tournament in Cairo Egypt.

Amunike who guided the Taifa Stars to the AFCON 2019; 39 years after the team's last appearance in the competition.

The Taifa Stars lost all three group matches and were eliminated in the first round.

In a statement published on its official website, the TFF siad it had reached a “joint agreement” with the 48 year-old former Nigeria international to terminate his contract.

“The Tanzania Football Association (TFF) and the National Team Coach, Emmanuel Amunike, have reached a joint agreement to terminate the contract between us.

“TFF will announce the time coach who will lead the National Team for CHAN matches.

“Team coaches will be announced after the Emergency Committee Committee meeting meets July 11,2019.

“The search for the new Coach has started immediately,” the statement concludes.

Amunike signed a two-year deal with the TFF in 2018 after he left Sudanese side Al Khartoum SC.

The Nigerian who was a dashing foward in his playing days had a remarkable playong career, which started with the Zamalek of Egypt from.where hemade a metoeric rise to Barcelona before being cut short by injury.

He had coached Nigerian Under17 team to world cup victory in 2014.