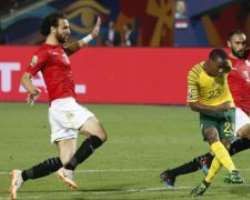 Thembinkosi Lorch scored the winner for South Africa in their shock 1-0 victory over Egypt in the Africa Cup of Nations. Lorch struck following a counterattack with just five minutes remaining to silence a crowd of 75,000 at the Cairo International Stadium.

The hosts were the favourites to win the competition, with Liverpool's Mo Salah in sparkling form during their opening matches. In contrast, South Africa qualified for the last 16 as the lowest-ranked of the four third-placed teams. However, they took the game to Egypt and were the more accomplished team over 90 minutes.

Madagascar provide Afcon with its most unlikely success story

The Egypt goalkeeper, Mohamed El Shenawy, made a spectacular fingertip save to keep out Percy Tau's dipping free-kick on 24 minutes and was busy throughout the first half as several efforts from the underdogs whistled past his goal.

Egypt's best chance fell to Mahmoud Trézéguet, who hit the ball straight at the South Africa goalkeeper, Ronwen Williams, after being fed a pass by an out-of-sorts Salah.

Salah teed up his teammate again in the 57th minute but once again Trézéguet hit it straight into the arms of Williams.

South Africa's captain, Thulani Hlatshwayo, should have put South Africa ahead after 70 minutes but he flashed his header wide.

South Africa will now face Nigeria in Wednesday's quarter-final after the Super Eagles ousted the holders and their bitter rivals Cameroon, scoring twice in three minutes to come from behind and win a thrilling last-16 match 3-2.

Odion Ighalo gave Nigeria a 19th-minute lead but Cameroon hit back with two goals in quick succession from Stéphane Bahoken and Clinton Njié before half-time.

Ighalo levelled again for Nigeria – who have lost three finals to Cameroon – in the 63rd minute amid suspicions of offside before Alex Iwobi snatched the winner for the jubilant Super Eagles three minutes later after he calmly placed a low shot beyond goalkeeper André Onana.

Both teams had finished second in their groups and not been in the best of form and it showed with an abundance of defensive mistakes but there was also much to admire in an end-to-end match.

The Nigeria manager, Gernot Rohr, said the shock defeat by Madagascar in their final group match may have benefited his side: “It did us good; it helped motivate us today to win this very difficult match.”

The Cameroon coach, Clarence Seedorf, said his team paid for sitting on their lead. “We slowed down a little too much instead of trying to score the third goal,” he said. “Obviously Nigeria has all the quality to score goals and I think that was what went wrong, in general terms.”