FIFA is taking over African soccer amid corruption charges at CAF 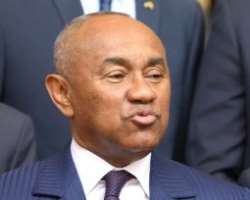 The decision comes amid a corruption controversy in which CAF president Ahmad Ahmad was arrested in Paris on charges of financial impropriety.

The arrest of Ahmad, a prominent member of FIFA's executive committee, represents as a major setback to the global body's claims of eschewing corruption after the ouster of longtime president Sepp Blatter.

Ahmad rose to power as CAFs chief two years ago by promising reforms, increased transparency and a new code of ethics as he unseated Issa Hayatou, who led the confederation for 29 years.

Samoura will lead a “forensic audit” of CAF finances and “a root-and-branch review” of governance, officials said. Samoura, the new boss
She will also oversee management of the organization and recommend reforms. FIFA say the move will put CAF on “a modern and sound footing, improve its image and reputation.”

Under the new set-up, Ahmad is unlikely to wield much power, if any.

CAF has been welcoming of the new arrangement, which has faced high-level opposition elsewhere. Aleksander Čeferin, president of UEFA, Europe's soccer governing body, has questioned the legality of the move.

Yet, there will be very little time for Samoura to settle into the new role—the African Cup of Nations, Africa's most prestigious soccer competition, kicks off this weekend in Egypt.