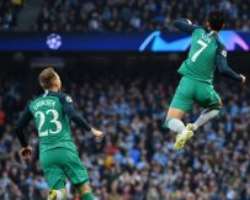 Manchester City's bid for an unprecedented quadruple of trophies ended in dramatic fashion as Tottenham progressed to the Champions League semi-finals on away goals as a pulsating 4-3 win for City on Wednesday was not enough to overturn their 1-0 first leg deficit.

After four goals were shared in the opening 11 minutes, Raheem Sterling and Sergio Aguero put City on course for the last four, but Fernando Llorente's decisive goal 17 minutes from time was allowed to stand despite a VAR check for handball by the Spaniard.

In a further twist, Sterling then had what would have been an injury-time winner ruled out by VAR for an offside.

After a series of frustrating defeats when the stakes were at their highest, Mauricio Pochettino's Tottenham finally came through on the big occasion.

Pochettino is yet to win his first major trophy, but he out-witted City boss Pep Guardiola, who has won every prize the game can offer.

Tottenham were aided by two huge VAR decisions that allowed to them to score the decisive third goal when Fernando Llorente bundled in off a combination of his arm and hip — and then escape what would have been a Raheem Sterling last-gasp winner as offside was given against Sergio Aguero.

But luck wasn't the reason for Pochettino's success as he leads Tottenham in the Champions League semi-finals for the first time despite not buying a single player in the last two transfer windows due to the restraints from the move to their new stadium.

Tottenham are in the last four of a European competition for the first time since the 1984 UEFA Cup because of Pochettino and no wonder Tottenham's jubilant fans chanted Pochettino's name loudly as he danced with his players on the pitch at full-time.

Pep Guardiola held his head in his hands when Ilkay Gundogan's close-range effort ballooned over the bar in the closing moments, the Manchester City manager's angst at his latest Champions League failure clear for all to see.

Guardiola is rightly regarded as the best manager of his generation after trophy-laden spells with Barcelona, Bayern Munich and now City.