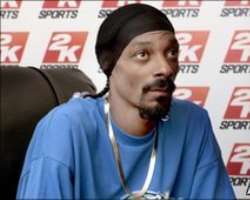 Snoop Dogg has been banned from a free festival in the Netherlands after police said they wanted to guarantee its “open and friendly character”.

Authorities asked organisers to find a replacement act for Parkpop in The Hague because they thought the US rapper was inappropriate.

Organisers say they have been left with little time ahead of the 27 June gig.

In 2007, the rapper was denied a UK visa after a fracas at Heathrow Airport involving members of his entourage.

The 38-year-old is scheduled to appear at UK festivals including Wireless and Glastonbury this summer.

Last year, he was cleared of hitting a fan who jumped on stage during a 2005 concert in Seattle, but his record company was ordered to pay damages.