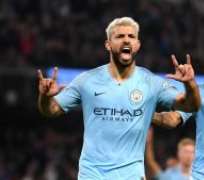 Just as on Sunday, it required a penalty kick to make the difference, with Bernardo tumbled in the box by Felipe Anderson just moments after coming on.

The Argentine scored his 25th goal of the season – sending Lukasz Fabianski the wrong way in the 59th minute.

But it was Bernardo who deserved praise with a weaving run in what threatened to be frustrating night for the champions.

It was a sign of his growing concern – and it paid off in spades, particularly on a night when Liverpool won 5-0 against Watford to maintain their one-point lead at the top.

Come the end of the season Guardiola may look back on this as three pivotal points.

He started the game without four of City's best performers this term, with the injured Fernandinho and Aymeric Laporte ruled out through injury, while Sterling and Bernardo were named on the bench.

But City still had an attack of Leroy Sane, Aguero and club record signing Riyad Mahrez.

And it was the £60m forward who could have put City in front almost from the kick off when ballooning a close range effort over the bar.

The home side looked like they were in a hurry to put the game to bed and just moments later David Silva struck post from inside the six-yard box.

After that early storm City spent the next 40 minutes dominating possession, but creating little.

Guardiola knew he had to make changes – particularly after Andy Carroll forced a flying save from Ederson just after the break.

On came Sterling and Bernardo for Mahrez and Sane – and it made all the difference.

After Bernardo's won the penalty for Aguero's winner, he and Sterling were involved in sweeping move that cut West Ham open – leading to David Silva seeing an effort cleared off the line by Ryan Fredericks.

Sterling saw another chance punched away by Fabianski and should have done better when steering a close-range effort wide.

It was a nervy finish, but City held out to stay on Liverpool's shoulders.