Hazard: 'We are Chelsea, we can beat everyone … if we want!' 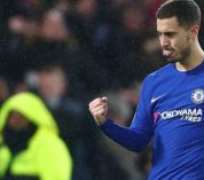 “If we want”
There is your Chelsea motto.
Summed up by Eden Hazard of all players, the team's biggest star and performance compass. Perhaps inadvertently, perhaps not. It's doubtful he meant it so seriously, but a lot of truth is said in jest. After all, he embodies that ideal.

If. We. Want.
If we want, we can beat Manchester City (2-0), Liverpool (2-1), Spurs (2-1). That's your top three, and three of the next six games (City twice, Spurs once). If we don't want, we cannot beat Leicester, Bournemouth, Southampton, Vidi FC. And that's just this season.

“We need to be focused. We knew before that this month (February) is going to be hard but … we are Chelsea, we can beat everyone if we want. So we just need to go play our football like we did today, and then we'll see.”

-Eden Hazard; source: Chelsea TV
If he wants, he can be the best. If he doesn't want, he cannot take the easy chance to score his hat-trick and instead makes the unnecessary pass to Ross Barkley, who had given up on the play because the obvious choice was to shoot.

Maurizio Sarri puts it down to motivation, mentality, first and foremost. He isn't the first, and just like Mourinho and Conte, he's probably right.

“I think [Sarri] will be happy because he was wanting a reaction from us and we gave him one. We are happy and we're looking forward to playing Man City [in next Sunday's EFL Cup final]. We need to keep winning like this. This kind of game is the way the manager wants us to play.”