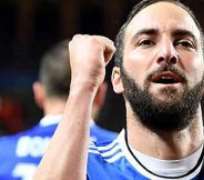 Gonzalo Higuain has finally joined Chelsea on a loan for the remainder of the season.

The 31-year-old striker moves to Stamford Bridge from Italian side Juventus. He spent the first half of the campaign on loan at AC Milan where he scored eight goals.

Chelsea's official statement partly read: “A proven goalscorer throughout his career, and an Argentina international, Higuain arrives with a wealth of experience at the highest level having consistently shown his attacking quality during spells in Argentina, Spain and Italy.

“Clinical in and around the penalty area, as well as providing a strong aerial threat, Higuain previously played under Maurizio Sarri at Napoli in 2015/16, when he finished as top scorer in Serie A with 36 goals, breaking a long-standing Italian record.

“Upon completing his loan move to Chelsea, Higuain, who will wear the number nine shirt, said: 'When the opportunity to join Chelsea presented itself I had to take it. It's a team I've always liked that has a lot of history, a wonderful stadium and they play in the Premier League, a league I've always wanted to play in.

“'I now hope I can give back that trust Chelsea has shown me out on the pitch. I can't wait to start and I hope to adapt as soon as possible.'”

Speaking more about the move which the club is excited about, Director Marina Granovskaia said: 'Gonzalo was our number one target in this transfer window and arrives with a proven record at the highest level. He has previously worked with Maurizio to great effect and is familiar with how the coach likes to play.

'This was not an easy deal for us to do because of the numerous parties involved, but we are delighted we were able to make it happen and we look forward to seeing the impact Gonzalo will make for us in the second half of the season.'

Named in the Serie A Team of the Year on three separate occasions, Higuain backs his personal achievements up with collective honours. A title winner with Real Madrid and Juventus, he has also won domestic cup competitions with both teams, as well as being part of the Napoli side which won the Italian Cup in 2013/14.

On the international stage, meanwhile, Higuain has represented Argentina at three World Cups and started the final against Germany in 2014.