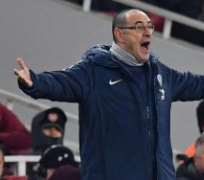 Maurizio Sarri is pinning his hopes on Gonzalo Higuaín to revive Chelsea's season in what could prove to be a make-or-break move for the head coach.

Sarri is hoping Chelsea can complete the loan signing of Higuaín by noon on Wednesday, so that the striker will be available for the Carabao Cup semi-final second leg against Tottenham Hotspur on Thursday night.

Former Chelsea head coach Antonio Conte was told Higuaín, then aged 28, was too old and too expensive when he suggested signing the Argentine before he joined Juventus for £75.3 million in 2016.

But Chelsea have backed Sarri by agreeing to sign Higuaín two-and-half years later , even though he is now 31-years-old and the initial four-month loan deal will cost over £10m in fees and wages.

Higuaín's form has also declined since Chelsea first opted not to try to sign him. When Conte was interested, the former Real Madrid man had just scored 36 Serie A goals for Napoli while playing for Sarri. But he will arrive at Stamford Bridge this month on the back just one goal in his last 12 appearances on loan at AC Milan.

Sarri wants Chelsea to get the Higuaín deal over the line as quickly as possible with his squad needing a boost following the 2-0 defeat against Arsenal, after which he attacked his own players by claiming they are “extremely difficult to motivate.”

He believes Higuaín, who excelled under him at Napoli, can give Chelsea a fresh impetus and help Eden Hazard to return to his best from his favoured position off the left.

But Sarri's reputation could be at stake over Higuaín, with Chelsea acting against their instincts to sanction a deal which sources in Italy claim will be made permanent if the club win the Europa League or finish third or higher in the Premier League. Chelsea also have the option of extending the loan for a further 12 months.

Doubts over his coaching, team selection and tactics have been growing among fans during a run in which Chelsea have lost four of their last nine Premier League games and some players believe Sarri must share the responsibility for the poor run.

Sarri can win over his critics if Higuaín proves to be a hit and revives the club's season, but concerns over his judgement will only grow if it does not work out and he proves to be an expensive short-term flop.

“You analyse Chelsea quite easily, you know their principles. If you stop Jorginho, you create great difficulties for Chelsea to build in the first phase. Then if you close their left side with David [Luiz] and Marcos Alonso, and you give the ball to the right side, it's quite difficult for them.”

The arrival of Higuaín signals the end of Álvaro Morata's Chelsea career, with the Spaniard joining Atletico Madrid on loan until the end of the season with the option of a £48.5m permanent move.

That would represent a loss of at least £8.5m for Chelsea, who signed Morata for an initial £57m from Real Madrid in 2017 but has struggled to adapt to the more physical nature of the Premier League.

Chelsea signed Morata as a replacement for Diego Costa and the circumstances of the Spain international's departure are set to be a key part of Conte's looming legal case against the club.

Conte is taking Chelsea to court over the £9m he believes he is owed, following his sacking last July, and is working on two separate lawsuits, one public and one private, for unfair dismissal.

There were 12 months remaining on Conte's contract, worth around £9m-a-year, when he was dismissed ahead of Sarri's arrival.

All attempts of mediation have so far failed and both sides are now preparing their cases against each other, while Conte is out of work and yet to be paid a penny by Chelsea.

Conte was caught by television cameras at Tottenham Hotspur's victory over Fulham at Craven Cottage on Sunday and he is thought to be splitting his time between London and Italy.

He has turned down an offer from Real Madrid since leaving Chelsea and is concentrating on his legal case ahead of trying to return to management in time for next season.

It is believed Conte would be interested in the permanent Manchester United job, while Real could make another attempt to hire him and he has several options in Italy.