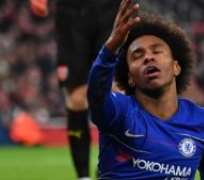 Maurizio Sarri has slammed his Chelsea players following their 2-0 defeat to Arsenal, stating that that his players are ‘very difficult to motivate’.

Chelsea’s backline started frantically at the Emirates, conceding possession on numerous occasions before they were made to pay by Alexandre Lacazette’s fine finish from a tight angle.

A little bit of luck went the Gunners’ way for their second, a lofted cross going in off Laurent Koscielny’s shoulder as he attempted to head home.

Regardless, Chelsea looked blunt and predictable throughout, and their manager opted to speak in his native Italian so that his point would be as clear as possible.

“I have to say that I’m extremely angry because this defeat was down to mentality,” Sarri told the press.

“They were far more determined than we were and I can’t accept that. It was similar to Spurs – I spoke to the players and I thought it was solved.

“I want to talk about tactics but it would appear this group of players are very difficult to motivate.

“I think when you see this type of game where one team is more determined then you can’t talk about tactics. Their level of determination was much better than ours throughout the game.

Pushed further on why he can’t get through to his squad, he said: “That’s a difficult question to answer.

“It seems that they’re not aggressive enough mentally – that’s down to their personalities and that’s difficult to change.

“You have to influence them and that could be down to a new player coming in or one of the old heads taking control.

“I don’t think a player at this level can be afraid to face up to their responsibilities. The best thing that can happen is that the players and I speak very openly.

“I am the person responsible for the players and it’s important for them to have the right attitude. Ig they can’t achieve that then maybe they shouldn’t be playing at this level.”

Despite Saturday’s loss, Chelsea remain three points ahead of Arsenal in fourth place and must now prepare for an FA Cup clash with Tottenham on Thursday