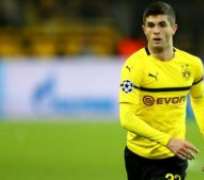 Maurizio Sarri says he knew nothing about Chelsea’s deal to sign Christian Pulisic just a day before the transfer was announced by the club.

Chelsea confirmed on Wednesday that they had reached an agreement with Borussia Dortmund over a €64million transfer for the United States international.

As part of the transfer, Pulisic has been loaned back to Dortmund until the end of the season, meaning he will not be seen in the Premier League until the start of the 2019-20 campaign.

The 20-year-old has blossomed in the Bundesliga over the past few years and was previously linked with other leading European clubs, including Liverpool.

However, while the Blues secured his signature, Sarri was as surprised as anyone at the move being completed, albeit club officials had asked for his assessment of the player.

“I didn’t know anything about Pulisic yesterday [Tuesday],” Sarri told reporters after Wednesday’s 0-0 draw with Southampton.

“The club asked my opinion about him about one month ago. My opinion was positive. Today I have known that the deal is done, but I didn’t know anything.”