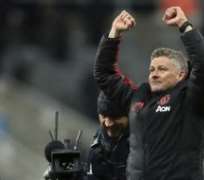 Ole Gunnar Solskjaer became only the second manager to win his first four matches in charge of Manchester United as his team beat Newcastle 2-0 thanks to second-half goals by Romelu Lukaku and Marcus Rashford on Wednesday.

Matt Busby was the other coach to achieve that feat, in 1946, putting Solskjaer in great company as he continues his perfect start to life at the helm of the club after replacing the fired Jose Mourinho last month.

Lukaku scored with his first touch, 38 seconds after going on as a substitute, to give United the lead in the 64th minute. Another substitute, Alexis Sanchez, set up Rashford for the second goal in the 80th as United emerged from its toughest test to date under Solskjaer with another three points and a clean sheet, too.

It was a dogged display that showed flashes of exciting attacking football at a ground where United had fallen to defeat in February, thanks in no small part to a man-of-the-match display by Martin Dubravka.

Newcastle’s goalkeeper was in the spotlight for the wrong reasons this time as he spilled a fierce free kick from Rashford, allowing Lukaku to tap in.

At the other end, poor misses from Christian Atsu and Salomon Rondon underlined the work still required for Solskjaer at the back.