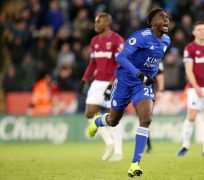 Leicester City midfielder Wilfred Ndidi is a doubt for the Foxes' Premier League game with Chelsea at Stamford Bridge on Saturday.

On Tuesday, the 22-year-old sustained a knock to his knee in their League Cup quarter-final loss to Manchester City, although he managed to play for the entire duration.

Claude Puel, on Thursday, confirmed that he will wait until Friday to decide on the involvement of the midfielder in the tie.

“We will see tomorrow if he can play or not. It's about his knee, he received a fall against him. He finished the game, but with pain, so we'll see if he can participate,” Puel said in a pre-match conference.

Ndidi has featured prominently for the King Power Stadium outfit this season with 17 appearances in the English top-flight, helping them to keep six clean sheets and scoring once.

Leicester are 12th in the league standings with 22 points and the Foxes will hope the midfielder shake off the injury before the encounter.