Mourinho: Liverpool should be stronger than Man United and they were 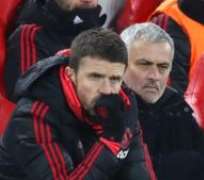 It wasn't even close, and Jose Mourinho makes it sound like Manchester United's 3-1 loss to Liverpool was simply down to a gulf in class.

Maybe that's true, but if so it means United has spent a disproportionate amount of money on a second-class group of players.

Here's Mourinho on NBCSN following a loss to his rivals in which United was out-attempted 36-6.

“Well, they are the stronger team. They should have the strongest team but it's hard to concede two goals in a moment and it's even harder the way the goals happened.

“Our difficult period in the game was the first 20 minutes where we couldn't cope with their fantastic intensity, speed, and pressing. After that we were quite calm in the game. It was controlled. We can say of course they attacked much more than us, but that was exactly the moment where the game was going into a dynamic where they were really frustrated with their center backs coming with the ball, shooting from 30 meters to the stands.”

Mourinho said the best United will finish this year is fourth, but guarantees they won't drop out of the Top Six.

He went as far as to say that Liverpool was fortunate to get their second and third goals thanks to deflections, which was partially accurate but, again, 36 shots to six.

Thirty more shots.
Three-zero.
In spite of that, Mourinho defended his players when asked if they've quit on him.  From the BBC :

And  Paul Pogba  sat the bench all 90 minutes. A higher-up at United, preferably Ed Woodward, needs to come out and make one of two statements to the media. Either he's cutting ties with Mourinho, or they are simply waiting out the string to swap out key parts in the hopes of a Champions League and FA Cup run.

Otherwise, it looks like a lost manager trying to guide a rudderless ship from one squall into another.