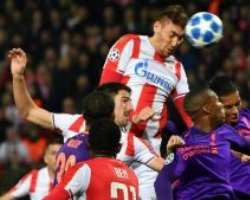 Champions League finalists just six months ago, Liverpool hoped a summer of heavy investment could take them one step further to a sixth European Cup, but a shock 2-0 defeat to Red Star Belgrade leaves them struggling to even make it out of the group stages.

While Anfield remains a fortress on European nights for the Reds, a worrying trend is emerging for Jurgen Klopp on the road, particularly with a visit to Paris Saint-Germain to come next in three weeks' time.

Liverpool didn't manage a single shot on target in losing 1-0 at Napoli last month and were also opened up in a 4-2 defeat to Roma in the second leg of last season's semi-final, progressing only thanks to a 5-2 first leg win.

“I saw, unfortunately, a few games like this already and it's really difficult to find your mojo back,” surmised Klopp as Belgrade rocked to Red Star's first win in the competition for 26 years.

All is far from lost. Liverpool remain tied with Napoli at the top of Group C on six points. Four points from their last two games would be enough to guarantee the Reds' progress to the last 16.

However, losing to what should have been the whipping boys of the group has made their task a much harder one.

“We need to make sure it will not happen again, otherwise it will be difficult because the next game is an away game again and the last one is a very difficult home game against Napoli,” added Klopp.

“We have to make sure in Paris we do better. There were a lot of moments when we could get in control of the game and we didn't do it, we made the wrong decisions.”

– New recruits left unused –
Liverpool's start to the Premier League season has been a different story. Still unbeaten after 11 games, the only points they have dropped came in draws against other sides in the top five in Manchester City, Chelsea and Arsenal.

Yet, even while Liverpool's results have remained positive, they have rarely been accompanied by the level of performance they achieved on their run to the Champions League final last season.

The prolific front three of Mohamed Salah, Roberto Firmino and Sadio Mane, who combined for 91 goals last season, have all suffered a downturn in form at different stages through the first three months of the campaign.

Firmino has scored just once in his last 11 games for club and country, but even on a night when Klopp tried to give the Brazilian a rare rest, he was thrown on at half-time in Belgrade after his back-up Daniel Sturridge missed a glorious chance to put Liverpool ahead.

“We had the first big chance – Daniel with a very big one. Each goal in a game like this leads the game in a specific direction,” lamented Klopp.

Liverpool's options in reserve were supposed to ensure a stronger challenge both in domestic and European competition this season.

Over £160 million ($210.5 million) was spent on new recruits, but only goalkeeper Alisson Becker has become a first-team regular as midfielders Fabinho, Naby Keita and Xherdan Shaqiri have largely been left on the sidelines.

Once more in Liverpool's hour of need in the Serbian capital, Fabinho and Keita were left on the bench for the full 90 minutes, while Shaqiri didn't even make the trip due to political sensitivities after the Kosovo-born Swiss international's controversial goal celebration against Serbia at the World Cup.