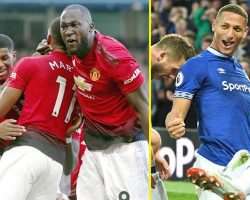 If the pressure on Manchester United cranked up again with their midweek defeat to Juventus in the Champions League, they released some of it with Sunday’s 2-1 win over Everton.

It was only their second victory in the last eight games but did at least ensure that momentum in the Premier League created with positive performances against Newcastle and Chelsea was not wasted.

It was not as comfortable as it should have been but Jose Mourinho’s team are going in the right direction, which has not always been the case.

Anthony Martial was the inspiration, winning the penalty that put the home side in front and then scoring himself early in the second half. It is not a crowded field but it was still one of United’s better displays of the season.

Positives
Martial has scored four goals in his last four games and is starting to show the consistency that Mourinho has been demanding all along. The United manager isn’t in the habit of dropping players who are scoring and creating goals and while there have been flashes from the Frenchman, it hasn’t been week in, week out.

Here, Martial won United’s penalty and scored the second with a fabulous curled finish from the edge of the box. He will be in the team again against Bournemouth next Saturday.

Negatives
Before the game, United had kept one clean sheet from their opening nine Premier League games compared to seven at the same stage last season. They should have had one here but gave away a needless penalty when they were in control to ensure a nervous finish to a game they dominated.

Manager rating out of 10
7 — Mourinho’s big decision before the game was whether to keep faith with Romelu Lukaku after eight matches without a goal. He left the Belgian on the bench and it paid off. United were more fluid going forward, particularly in the first half, and with Martial and Marcus Rashford stretching Everton, it allowed more space for Paul Pogba and Fred to get forward.

GK David De Gea, 7 — Had very little to do in the first half but made a good save low down to his left from Richarlison just after half time. Seconds later United doubled their lead but it would have been a very different game had the Brazilian’s effort crept in.

DF Ashley Young, 6 — It is not easy for a 33-year-old to play twice in a week but he did very little wrong against Everton. Fought for everything and flew into one crunching challenge on Lucas Digne. Got lucky when he let Bernard have a free run at De Gea but that was his only mistake.

DF Luke Shaw, 7 — Never easy for Shaw to get forward when he’s playing behind Martial, but he did well to keep Theo Walcott quiet. The Arsenal man rarely threatened and it was no surprise when he was hooked by Marco Silva.

DF Chris Smalling, 5 — Booked early for challenge on Richarlison and was lucky to stay on after clattering into the Brazilian to give Everton their penalty. Left isolated in the build up after Pogba had given the ball away in midfield.

DF Victor Lindelof, 7 — Had his best game in a United shirt against Juventus on Tuesday and followed it up with another positive performance here. Happy to do the dirty work as well as play out from the back. Getting better.

MF Nemanja Matic, 6 — Didn’t have a lot of help in front of the back four with both Pogba and Fred bombing forward but the Serbian is still looking rusty. Lost out to Gylfi Sigurdsson a few too many times.

MF Fred, 7 — Starting for the first time since Sept. 22 and he took his chance. Looked energetic in midfield and had one or two positive bursts forward.

MF Paul Pogba, 7 — After his trademark slow run-up, he saw his penalty saved by Jordan Pickford but tapped in the rebound for his fifth goal of the season. Only one behind his tally for the whole of the last campaign. Clever pass for Martial to whip in the second just after half-time but tainted his afternoon by needlessly gave the ball away before Everton’s penalty.

FW Juan Mata, 6 — Shifted to the right of the front three to accommodate Rashford’s move inside, the Spaniard had a great chance to open the scoring with a header on 20 minutes. Not as influential out wide as he has been as the No.10.

FW Anthony Martial, 8 — United’s best player. He had already created a good chance for Mata and tested Pickford before winning the penalty by running at pace towards Idrissa Gueye in the box. His finish for United’s second was fantastic and should have added a third in stoppage time.

FW Marcus Rashford, 5 —Playing as the central striker with Romelu Lukaku on the bench, he had one clear chance when he was put through by Mata but saw his shot saved by Pickford. Had to deal with a lot of balls arrowed towards his head which isn’t his strength.

MF Ander Herrera, N/R — Brought on to help close out the game.