Miracle of Asaba! Rangers come back from 3-0 to beat Beat Kano pillars to 2018 Aiteo Cup 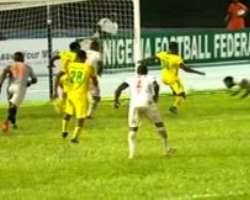 Enugu Rangers produced a dramatic comeback to level 3-3 draw with Kano Pillars at full time on Wednesday at the Stephen Keshi Stadium in Asaba, Delta State.

The South-East based club then went on to beat Pillars 4-2 via penalties to emerge champions of the 2018 Aiteo Cup.

The game started at a high tempo with Kano Pillars taking the lead as early as the fifth minute when midfielder Rabiu Ali fired in a fierce shot from a close range.

Moments later, Ibrahim Alassan's corner kick was pushed into a goal by Rangers goalkeeper, Femi Thomas, to ensure Kano Pillars takes a 2-0 lead into the break.

At the start of the second half, Nyima Nwagua scored the third goal for Pillars, leaving Rangers with a huge mountain to climb.

However, the comeback fight for the Rangers started in the 77th minute when Kelvin Itoya scored a stunner.

Chidera Ezeh kept hopes alive when he scored the second goal for the Enugu side in the 82nd minute.

Kano Pillars had a chance to seal victory but Junior Lokosa's effort was stopped by Nana Bonso.

On the other end, Ajani Ibrahim produced an unbelievable header to level the scores and send the game to penalties.

Isaac Loute took the decisive kick for Rangers and scored to secure an incredible victory for the Enugu based club.

It is the first FA Cup win for Enugu Rangers since 1983.

The team have also picked a ticket to next season's CAF Confederation Cup.