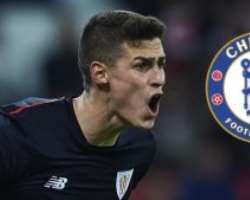 Athletic made it clear that they would not accept any bids for Kepa, meaning that the Blues must meet a price tag in his contract in order to proceed.

It is believed that Chelsea have now agreed to pay the fees required to secure the goalkeeper.

It would also make Kepa the world’s most expensive goalkeeper, less than a month after  Alisson secured that title with a £65m (€73m/$85m) move from Roma to Liverpool .

Chelsea have formalised their interest as they negotiate the exit of Courtois from the club. Goal understands that Kepa’s representatives are now in talks with the Blues regarding personal terms.

Meanwhile, Courtois has failed to show up for the first two days of training after the World Cup, despite being scheduled to return on Monday for medical tests ahead of the new season.

Real Madrid are keen to secure Courtois in a €35m deal (£31m/$40m), meaning Chelsea will have to find the extra funds needed to sign Kepa from Athletic.

Los Blancos have not yet made a breakthrough in their pursuit of the Belgium international, with Chelsea waiting to have their replacement lined up before sanctioning the deal.

Indeed, the Blues are faced with spending more than they had previously planned to, after missing out on Alisson, who was their first-choice target.