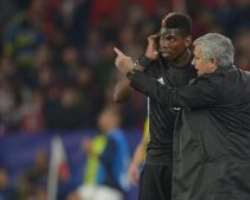 Things have not come easy for  Paul Pogba  at Manchester United, and it appears to be taking its toll.

According to an ESPN report , the 25-year-old French international has become “unsettled” at Manchester United, in large part due to public criticism he received from manager Jose Mourinho over the summer.

The interview in particular the report points to is  an interview with ESPN  he did two weeks ago wherein Mourinho wonders why Pogba's performances in the World Cup for France were far more impressive than those with Manchester United. Mourinho appeared to question Pogba's effort and heart while playing for his club, saying, “I don't think it's about us getting the best out of him [at Manchester United], it's about him giving the best he has to give.”

Mourinho also appeared to question Pogba's focus when at his club, with prevalant outside distractions.

“I think the World Cup is the perfect habitat for a player like him to give [their] best,” Mourinho said. “Why? Because it's closed for a month, where he can only think about football. Where he's with his team on the training camp, completely isolated from the external world, where they focus just on football, where the dimensions of the game can only motivate. During a season, you can have a big match then a smaller match, then one even smaller, then you can lose your focus, you can lose your concentration, then comes a big match again.”

However, the report states Pogba is not to the point where he wishes to force a transfer, with three years left on his contract at Manchester United. It also claims that Pogba is a “favorite” of United chairman Ed Woodward, who is often credited with much of the say in transfer negotiations for the club.

Pogba moved to Manchester United in the summer of 2016 for a then-record $121 million, and has been stuck with massive expectations ever since. The Frenchman has often been criticized for his subpar performances at Old Trafford, but in recent months, much of the criticism from fans and media has switched to Mourinho, especially in the wake of Pogba's stellar performance in France's World Cup winning effort. Mourinho has taken plenty of heat for not putting Pogba in a position to succeed at Manchester United, and some have even theorized that if things don't change, Woodward will be tasked with picking one or the other.

Reports on Monday from Italian journalist  Gianluca di Marzio claimed that  Barcelona made an official offer for Pogba that consisted of $58 million plus defender Yerry Mina and midfielder Andre Gomes, an offer which Manchester United scoffed at as paltry compared to their valuation of the Frenchman.