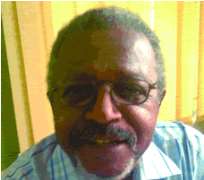 Weavers
Mr. Lloyd Weaver is an African-American who has lived in Nigeria with his family for over two decades. He is an artiste and currently a producer with The Serengeti Network. Right now, the dramatist is working on a drama series about Nigeria's independence entitled, Roots Style. He, however, lamented lack of funds to achieve his dream. In a chat with Blockbuster, Weaver opens up on his sojourn in Nigeria and challenges of celebrating our past heroes in film. Excerpts:

Background
I am an African-American, who at a very early age in life became very interested in my African heritage. Probably because I lived in New York City, it became a melting point in terms of ethnicity. I lived among people mostly from Europe who were aware and proud of their own ethnic heritage. So, I heard people who said that their ancestors came from Hungary or China. I wanted to know where my own ancestors came from. And I became interested in how we came to America, which was different from other Americans. We were stolen from Africa and in the process of slaves mixing together in the US, our specific ethnicity was lost but it still became a source of fascination to me.

So, I began to study more about African history, African nationalities, culture and traditions and anything that has to do with Africa. But my interest began when I was a child in primary school. I grew older and began to study more and I discovered that majority of slaves taken were from the area that is now called Nigeria, along this coast which is called the Slave Coast. I knew that Nigeria was more than likely ancestral to me, and a lot of other places. But later on in life, I went to Columbia University where I took a course in African Studies with one Professor Adugbowoyin, and he showed statistically that more slaves came from Nigeria than any other area of Africa. So, if you considered this you would understand. But this is not really what brought me to Nigeria.

Journey to Nigeria
I think it was a spiritual journey. I think I have been sent by God to go where He wanted me to be on this planet, to bring down certain things that I have the advantage of gaining in the US. I came to Nigeria out of curiosity in 1969. By then I was already involved professionally in the television business. And I was very curious about the television stations. Then I went to Ibadan. I looked around out of curiosity and it stayed in my memory. By coincidence in 1982, I was asked by a fellow African/American to join the television in the US, a programme that I studied in order to come to Nigeria and train personnel working with the Nigerian Television Authority. Of course, I was very pleased to do this, I was working in a place called CBS News (US) at a time so I was pleased to take that trip to come over here.

On Roots Style
Americans have a heritage, they believed that somebody fought and many people died that is why they can enjoy certain things, and enjoying them they should always uphold as the ensemble of the things done by their forefathers. We need to teach our young people to feel that way or else they would forget the idea of a nation, knowing that my first idea was to write a series of text books for Nigerian schools and to begin a campaign to get history back into the curriculum, but later somebody said to me, 'Lloyd, you forget that you are a television producer', and I began to organize a group of people to study Nigerian history understand the past that was a glory that brought about the independent that's being written into drama. The opportunity presented itself with this year that is going to be the 50th anniversary of our independence.

Best hands
You've all seen Roots and seen how history was made into drama, you probably watch BBC History, there has been a lot of history on television, and so the idea of dramatizing history is nothing new. We always see European films about the great battles of their ancestors. So, doing historical film is nothing new, we've got some of the best actors and actresses in the world right here in Nigeria. We have some of the best television and film technicians as Nigerians though they are scattered all over the world, but we have the best of them here, so we are going to draw on writers who are Nigerians including cameramen and directors who are Nigerians.

Wherever they are in the world, we are asking all of them to come home and create ultimate television or film of their lives the one that is going to inspire Nigerians to understand who they are as a single people and be able to rally themselves together. Because we all exist under a single flag, we want to teach Nigerians to honour their flag, to honour what their ancestors accomplished, to forget what happened between 1960 and today, to go back to what a common heritage is. We've been talking to the families of all the founding fathers and we have been traveling all over the country even to England to talk to descendants, the so-called colonial masters.

Celebration
We are going to air 13 episodes at an episode per hour. Our intention is to go on air on July 1, 2010. There are 13 weeks preceding the celebration on October 1. Our final episode where we would show the raising of Nigeria's flag would be on September 29, the eve of the anniversary. Nigerians would have watched the whole thing and finally for the first time maybe since independence, Nigerians will fully understand what they are to celebrate and it is going to be such as you have never seen in your life.

Heroes and villains
This is drama, and drama at its best, if you know anything about drama then you will know that the drama is built on conflict, there is a good guy and a bad guy, usually in the beginning of the drama, there is a bad guy that is doing very well and the story is on what the problem is. In this case, Nigerians are the protagonists, and the common problem is the British colonialism. So, British colonialism is the bad guy. At the beginning of the story, you might say European colonialism of one kind or another because we know that the British is preceded by the Portuguese who came to rob and steal and there were also the French and Germans. Our people still fought and there were heroes that every Nigerian should know about like Obafemi Awolowo, Ahmadu Bello and Nnamdi Azikwe.