Sarri has same intensity and mentality as Guardiola: Pedro 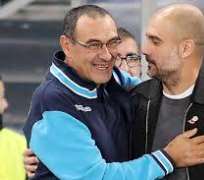 The winger believes it will take time for the new Blues coach’s ideas to catch on in the team, but is excited to work with him

Pedro played under Guardiola for five years in Barcelona, following the Catalan into the first team at Camp Nou after they worked together in the B side in 2007-08.

Sarri only took over from Antonio Conte at Stamford Bridge less than two weeks ago, but the Spanish winger has already noticed parallels with the Manchester City boss.

“They are similar. Their intensity, mentality. It is good,” said Pedro.

“These ideas will take time. The coach is very motivating. A really good, honest coach. I knew of him and what he did at Napoli. I was not close with him but he is a very good coach with very good ideas.

“When he arrived he was very good with the players, speaking a lot and really, really hammering on the pitch his ideas. It is a very big change for the players.”

Sarri gained a reputation for an attacking brand of possession football at Napoli, where he was in charge for three seasons.

He has already raided his former club as he looks to implement his style in west London, signing Italy midfielder Jorginho – who made his first Chelsea appearance against Perth Glory on Monday – in  a deal reportedly worth £57 million  ($86m).

Commenting on the new signing, Pedro said: “Jorginho is a very good player, clever, fast. This is good and a big challenge for him to play here in the Premier League but he is very strong.”