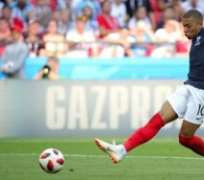 It is one of the gifts of being the most talented teenager footballer in the world that Kylian Mbappe makes fast defenders look slow and slow defenders look ridiculous, although in the end this was about bigger things than just a first half demolition of poor old Marcos Rojo.

The 19-year-old's savage turn of speed that won France the penalty for their first goal saw him flash before our eyes in real time while simultaneously the careers of half a dozen Argentinian defenders and midfielders were flashing before theirs. One of those moments that every old pro recognises when the legs are getting slower, the youngsters are getting quicker and the best they can hope for is to kick him before he reaches the area.

At the other end of the pitch, the unreadable Lionel Messi weighed up what the chances were of surviving another opponent like this, and then another, and then another, with a team of willing triers from Argentinian's domestic league and beyond. If his old friend Javier Mascherano, who retired from the international game at the end, was still the best bet for holding midfield, then Messi will know himself that he barely has to ask the question.

It would be nonsense to say the baton was handed from Messi to Mbappe on this hot afternoon in Tatarstan because no-one can lay claim to what Argentina's No 10 has done until they have dominated the opposition for at least a decade. But you could imagine a reluctant acceptance in Messi as he surveyed the gallant attempts of Enzo Perez, Nicolas Tagliafico, Maximiliano Meza et al to compete with this talented generation of young Frenchmen and it was not hard to guess his thoughts.

Messi has done his best for a very poor Argentina squad, and  a coach Jorge Sampaoli whose attitude towards his surfeit of attacking talent has been to play fewer and fewer of them as the tournament has progressed. Perhaps Messi's last act as an Argentina international was to stroke the cross on to the head of Sergio Aguero at the back post for an Argentina goal that narrowed the margin to closer than it should have been.

Lionel Messi and Argentina are out of the World Cup

If he is to win the World Cup in Qatar  to end all arguments  about the greatest of all time debate then Messi will have to do so at the age of 35 and while that is not beyond the realm of possibilities, his country will have to find him ten new team-mates in order to do so.

At the end Messi stood for a while in his own half, while his team-mates kept a respectful distance, as unwilling to leave the pitch before him as a Soviet Union audience were to be the first to take their seat during a standing ovation for the general secretary. Eventually Messi walked off, with barely a glance up at the Argentina fans who had dominated the stadium, a curt departure and a cold stare.

It had been a low-key performance from him, punctuated by two goals that briefly gave Argentina the illusion of being in this round of 16 tie. The first was their only attempt on goal in the first half, a beautiful ping from Angel Di Maria with his left foot that took the score to 1-1 and then a second after the break that glanced off Mercado's left foot before he realised he had even put it there.

In his first press conference question, Jorge Sampaoli was asked whether he would be resigning and the Argentine coach seemed to say that he would think about it. He is one of those international managers for whom the pretence of authority is paper-thin and although he said all the things coaches of big football nations are supposed to say in these situations it was doubtful whether anyone believed him.

“I was very excited to be here, I had many expectations and we wanted Argentina to go as far as possible,” he said. “We had this very exciting project, and I wanted to move everybody with this idea. I always believed that Argentina could win. So of course I feel a certain frustration, but this will make me stronger as a coach, allow me to learn to grow.”

In the first half his team had played a terrifyingly high line against such a fast France team although it had barely mattered when Mbappe set off from his own half on ten minutes at twice the pace of anyone on the other side. When Rojo finally reached him it was all he could do to thrust himself into the teenager and concede the sort of penalty that  VAR  barely had to check.

Antoine Griezmann converted it confidently and while Argentina had more of the possession it was France who looked the more dangerous on the counter-attack. N'Golo Kante was in charge of cutting off the supply line to Messi and it was working well, which only made it more of a surprise that France found themselves 2-1 down within three minutes of the second half starting.

A lesser side might have struggled up against Argentina, digging in for their lives and urged on by their magnificent support. The equaliser from Benjamin Pavard illustrated the quality of player at Didier Deschamps' disposal, a right foot half volley, struck first time from 30 yards out with the 22-year-old falling over as he did it. It was an outrageous goal from a player who made a late push to make the squad, but it was about to be trumped by Mbappe.

His first came when the ball was loose in the area from Lucas Hernandez's cross and Mbappe pounced, bursting left and then unleashing a shot past Franco Armani. His second was an ice-cold finish at the end of a move that went from Hugo Lloris to Samuel Umtiti, to Griezmann, to Blaise Matuidi, and on to Olivier Giroud before he picked out Mbappe's run. A booking for Matuidi means he will miss the quarter-finals. At that point, with 22 minutes left, Argentina looked flat out but pushed to the end, when substitute Aguero headed in.

No teenager since Pele in 1958 has scored more than one goal in a World Cup match, but Mbappe wisely avoided comparisons afterwards. “Let's put this is context,” he said, “Pele's another category”. His arresting talent will take him a long way and one day he may, like Messi, play in four World Cup finals. Although the one thing he will not be able to control in ten years' time is whether the players around him are up to the task.

5:13PM The stats from today’s match

Via Opta.
5:08PM A star is born
Read Sam Wallace’s report from Kazan on how  Mbappe brutalised the Argentina defence .

The weakness that France had spotted in Argentina's defensive high-line will have been no surprise to those who have seen the ball played in behind Nicolas Otamendi or Marcos Rojo in the Premier League, and when either is forced to chase back towards his own goal.

The difference this time was that in a player as spectacularly quick as Kylian Mbappe, Argentina barely had to leave any room in behind them for the man from Paris Saint-Germain to exploit the space. He is so fast that he makes quick players look slow – Kyle Walker at the Stade de France in June last year – and slow players look positively static.

Mbappe would prove himself just as lethal bursting after the ball over short distances in the second half, but it was his pace over longer sprints that Argentina first had to deal with. His two goals and astonishing speed made this the 19-year-old's showpiece game at a World Cup finals.