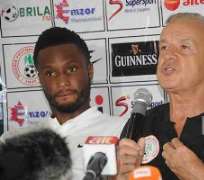 Super Eagles coach Gernot Rohr has expressed optimism that the family atmosphere in his team will see them avoid defeat to Iceland in their must-win Group D game against Iceland in the Russia 2018 FIFA World Cup on Friday.

The Super Eagles must go all out for victory to stand a chance of qualifying for the knockout stage of this summer's World Cup.

Iceland will be banking on their impressive performance against Argentina which ended 1-1.

Speaking in his press conference in Volgograd on Thursday, Rohr said: “We're living like a family, we have a plan and we won't lose tomorrow.”

When quizzed whether the hot weather in Volgograd, venue of the match between Nigeria and Iceland, will favour the Super Eagles, Rohr responded: “Iceland will have a home game here tomorrow with thousands of fans in the stadium. The situation in the match against Croatia was the same. If the heat is an advantage for us then we'll take it!”