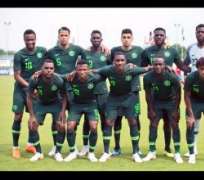 The Super Eagles held a crisis  meeting behind under-fire  Nigeria coach  Gernot Rohr on Monday night as  they try to  turn things around their precarious position at the Russia 2018 World Cup ahead of their next fixture against Iceland on Friday.Nigeria are  in grave danger of an early World Cup exit after opening their campaign in the tournament with a  2-0 defeat to Croatia in Kaliningrad on Saturday. The three-time African champions must win the clash  at  Volgograd Arena to keep alive their hopes of advancing to the second round of the championship.

A below-par Croat side fired by La Liga stars Lukas Modric and Ivan Rakitc ran out winners after an analogue Nigerian team failed to deal with dead ball situations.

New Stoke City midfielder Oghenekaro Etebo, who was the shining light in the hapless Rohr's side, inadvertently directed the ball into his own net, while William Troost-Ekong gave away a needless penalty converted by the Man-of-Match Real Madrid midfielder Modric.

Our correspondent learnt that the players were not happy with Rohr's team approach to the encounter in which China-based forward Odion Ighalo was isolated, Chelsea wing-back Victor Moses rendered a mediocrity showing and young Arsenal attacker Alex Iwobi was anonymous until he was substituted.

Camp sources told our correspondent on Tuesday that the seething players allegedly held a meeting where they  resolved to give their all against the  fearless Nordic side who made  Argentina superstar Lionel Messi look ordinary in their 1-1 draw  at the Spartak Stadium in Moscow on Saturday.

“The players reviewed their performances in the match against Croatia and resolved to hold talks with the coach before the game,” the source said.

The source also claimed that captain Mikel Obi  has come under pressure from his colleagues to persuade Rohr  to  feature players in their natural positions and also to play two strikers upfront.

Ndidi, whose fitness has a question mark,   emerged as  one of the flops against  Croatia, a tie  in which Etebo was a revelation.

It was also learnt that Rohr wants players who can match the combative and athletic Iceland side, with  players of an  average 1.90m in height.

It was also learnt that the former Gabon manager could retain striker Odion Ighalo in his line-up and hand  Ahmed Musa a starting role  as he seeks to break down Iceland's.