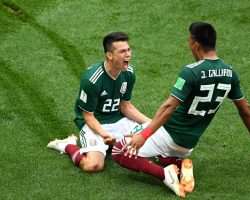 The 2018 FIFA World Cup in Russia has its first absolute stunner. Mexico, behind a first-half goal from Hirving Lozano, upset reigning champs Germany in the group stage opener, 1-0. In a tense, hectic match that would make anybody shake from the nerves, El Tri bent but did not break in the second half, withstanding chance after chance from the European giants for arguably its greatest World Cup victory ever.

Lozano, on the counter, was the hero on the day in attack, beating Manuel Neuer with this effort:

FOX Soccer
✔ @FOXSoccer
The youngster puts it away!
Chicharito starts the counterattack and Chucky Lozano finishes it to give Mexico the 1-0 lead.

Twitter Ads info and privacy
A massive, world-shaking goal that Lozano said after the match was the most important of his young, sparkling career. After the match, Lozano put all the praise on his coach Juan Carlos Osorio.

“He told us to keep playing like we were playing. To come out 100 percent … He saw the game well,” Lozano said in the post-match press conference.

“To start off on the right foot against the best team in the world, it’s a huge result and great work from the team.”

Guillermo Ochoa was huge in goal for El Tri as well, making save after save to keep the mighty Germans out. Germany had 60 percent of the possession, 25 shots, nine on target, yet couldn’t crack El Tri’s defense.

The win gives Mexico three points and puts them in a golden spot to move on, while Germany now can’t afford another slip up with South Korea and Sweden to come.