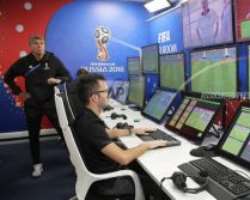 The 2018 World Cup features 32 teams vying for the same trophy. The world’s biggest sporting event kicks off Thursday at 11:00 a.m. ET, when host Russia takes on Saudi Arabia. Brazil is favored to win its sixth World Cup title at 7-2, followed closely by Germany at 4-1 and Spain at 6-1. Before a team can etch its name in history, they will first need to escape the Group Stage. In addition to picking an overall winner, bettors can wager on the results of all eight 2018 World Cup groups. For example, Spain is a -240 favorite to win Group B, meaning it would take a $240 bet on the Spaniards to win their group to return $100.

Before you make your picks on which teams top their respective groups at the 2018 World Cup, you need to see what European soccer expert David Sumpter has to say.

Sumpter is an applied mathematician who wrote “Soccermatics,” the book that shows how math works inside the game. Together with experienced analysts, Professor Sumpter developed the powerful Soccerbot model.

The Soccerbot reads current odds and all team performance data, calculates key metrics and predicts upcoming matches. In the 2½ seasons since it was born, the Soccerbot is up 1,800 percent on bookmakers’ closing odds. That’s right — 1,800 percent.

Now, the Soccerbot has computed each country’s true probability of winning its group at the World Cup 2018.

We can tell you Brazil has the highest probability to advance out of Group E despite losing defender Dani Alves to a knee injury. The 35-year-old, who has made 107 appearances for the Brazilian National Team, was injured while playing for PSG in the Coupe de France final.

Another team the model is all over to win its group: Spain, which has a 62.8 percent chance of topping Group B.

The 2010 World Cup champions, who are making their 15th World Cup appearance, hope the influx of young talent and veteran leadership will be the right formula to hoist the trophy for the second time in Spain’s history. Spain’s quest for the 2018 World Cup title begins against 2016 European champions Portugal and Cristiano Ronaldo.

Spain is led by Ronaldo’s Real Madrid teammate, Sergio Ramos, the country’s second-most capped player. Ramos was a vital part of the Spanish teams that won two European championships and a World Cup title between 2008 and 2012. Portugal (28.6 percent) has the second best chance to win Group B and is certainly capable, but ultimately the star power of Spain will be too much to overcome, the model predicts.

Sumpter’s model also says two countries with World Cup outright odds of longer than 25-1 will advance past the group stage. Anyone who backs these underdogs could hit it big.

So who wins each group at the 2018 World Cup? And which massive long shots have the best chance to shock the world and advance to the Round of 16? Check out the odds below and then  visit SportsLine now to see who David Sumpter is picking to win each group at the 2018 World Cup, all from a European soccer expert who created a model that’s returned an 1800 percent profit on bookmakers’ closing odds .