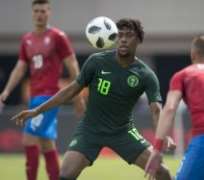 Here's something quirky, Arsenal's Alex Iwobi played deeper in the midfield than John Mikel Obi! Exactly the brilliant, groundbreaking piece of tactical acuity the Super Eagles required. The corollary was that the Super Eagles were painful to watch, sterile in possession in the midfield third and lacked penetration and incision in the attacking third.

After the relative success of the 3-5-2 in the second half at Wembley against England, Gernot Rohr persisted with the shape in the Super Eagles final friendly against Czech Republic. John Ogu reprised his role as the left centre-back while Wilfred Ndidi started in midfield.

The game against England finally convinced Rohr of Iwobi's value in the midfield. Rather than being shunted out wide, where he is eternally guilty of not offering enough cover for his full back, the German coach became —belatedly—aware Iwobi was more effective in the midfield, orchestrating play.

Against the Czechs, Iwobi played in a midfield triangle alongside Ndidi and Mikel. Iwobi saw more of the ball, smartly moving the ball around the midfield, instigating passing interchanges and neat combinational plays but most of it was in the midfield third and it did no damage to the opposition.

Mikel Obi was the furthest forward of the midfield trio

Nigeria through the qualifiers had mostly defended deep, breaking with pace when they got the ball. It was a typical counterattacking side that was fitted with the tools: fast pacy wingers, a playmaker with good passing range and a striker with decent ball skills. The midfield third was mainly about tackling and ball-winning rather than ball retention but Iwobi's inclusion in the midfield triumvirate has largely altered things. Nonetheless, the team hardly created clear cut opportunities.

It became apparent that Iwobi was on the wrong side of the triangle, receiving ball deep rather than between the lines in attack. Iwobi's movement on and off the ball allied with his ability to effectively receive balls on the half-turn makes him the perfect fit behind the two attackers.

Change in philosophy
3-5-2 at least tries to solve a problem, the Super Eagles inability to properly build up play. With more passing options available for ball transition from the defence, a superior anchorman to Ogenyi Onazi in place, the Super Eagles look to have switched from the quick transition that dominated the World Cup qualifiers to a more patient and possession based approach. The defence line stepped higher than usual in the Czech game, with Leon Balogun and Ogu either side of William Troost-Ekong.

The change in shape seemed to have informed the change in philosophy with players more comfortable with possession in the side and Victor Moses playing infield as part of the attacking duo.

It certainly will take time for Moses to get accustomed to a more central role with many opponents clustered around him and little space to run into. Rohr will have to work extra time, to help the players quickly adapt to the change of roles and shape because if the Czech game was anything to go by, the Super Eagles are not ready for the World Cup. Thankfully, there's eight days to the Super Eagles first game against Croatia, more time for fine tuning.