super Eagles falter again, beaten 1-0 by Czech Republic which did not qualify for World Cup 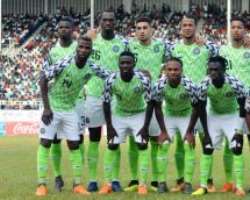 The Nigeria national team, the Super Eagles, has faltered again in its pre-World Cup friendly,  making Nigerians to doubt if the country’s hope of making it out of the group stage at the tournament would be realised.

Many Nigerians expected better reaction by the Super Eagles after losing to England 2-1 at Wembley last Saturday.

The Czech Republic team  was beaten 4-0 by Australia in their own last outing.

That, however, was not the case on Wednesday as the Super Eagles were beaten 1-0 by their opponents.

Despite fielding a strong starting XI which could pass for what might obtain in the opening group game against Croatia in 10 days' time, the Super Eagles fell behind to Czech Republic in the 25th minute.

At no point in the first half did Nigeria appear to be in the ascendancy and, shortly after surviving a scare, they deservedly found themselves trailing in the 25th minute – Kalas scuffing in from close range after Francis Uzoho parried Tomas Soucek's header right to him.

The closest Nigeria came to levelling before the break was Wilfred Ndidi's 30-yard drive, which was brilliantly tipped around the post by Tomas Vaclik in the Czech goal.

Although a downpour briefly interrupted play in the early stages of the second half, Nigeria played with more intent after half-time and went close in the 63rd minute, as John Obi Mikel saw a header saved by Vaclik.

Despite Nigeria's efforts and attack-minded approach, a late equaliser never arrived, consigning them to a second successive defeat in their World Cup preparation games.

Tomas Kalas was the goal scorer for the Czechs and Nigeria could not find her way back into the game despite the flurry of chances that came their way.

It is now the fourth game in a row that the Super Eagles have failed to get a win.

The last victory for Gernot Rohr's men was against Poland before losing against Serbia, England and forcing a draw against Congo DR.