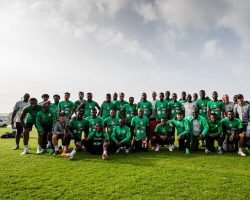 The Super Eagles have the objective of coming out of  Wednesday's

psychological tune for the FIFA World Cup finals.
Coach Gernot Rohr said  on Tuesday  that a win would be the target,

against the backdrop of consecutive losses in friendly matches against

Cup against Croatia only 10 days away.
“We will go for victory that would boost spirit and earn team

confidence ahead of our first match in Russia. It would not be an easy

pick but we will work hard for it.”
Wednesday's  encounter at the Rudolf Tonn Stadium – a multi-use

facility in Rannersdorf, a city in the sub-division of Schwechat,

outside Vienna – will be the third official meeting between both

countries.
Nigeria and then Czechoslovakia drew 1-1 in a group phase match at the

1980 Olympics in Moscow, with Vizek scoring for the Czechs in the

left on the clock. Nigerian forward Emmanuel Osigwe had a goal from a

by two goals to one – as part of the King Hassan Cup Tournament.

Team spirit was further lifted ahead of the match following the

(Equipment Officer) from London. The three persons were denied entry

visas into Austria by that country's embassy in Nigeria, but the

Nigeria Football Federation approached the Embassy of Austria in the

United Kingdom, with the assistance of the Nigeria High Commission in

London, and the visas were issued  on Tuesday .