soccer star Ronaldinho says: "It’s a lie. I won’t marry my two fiancees at once", 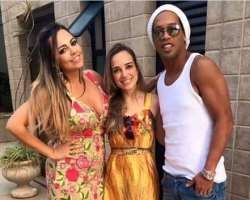 Former Brazilian soccer star, Ronaldinho Gaucho, has denied reports he plans to marry his two fiancees at once.

“It’s the biggest lie,” he told Globo Esporte Thursday. “I’m not getting married.”

The rebuttal came a day after O Dia reported that the 38-year-old was planning to enter into a civil union with two women at the same time.

The New York Daily News reported that “Polygamy and bigamy are illegal and punishable by up to six years in prison in Brazil, but civil unions among more than two parties are not unheard of”.

Ronaldinho and his two fiancees, Priscilla Coelho and Beatriz Souza, have been living in his Rio de Janeiro mansion since December, according to O Dia.

He’s juggled the two women since he met Souza in 2016, and has told Brazilian media that he is adept at polyamory, New York Daily News said, adding that the former FIFA World Player of the Year said he plans to retire from soccer in January.