Huddersfield draws at Chelsea to stay in Premier League 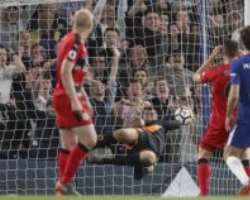 Huddersfield secured a second season in the Premier League by drawing 1-1 at Chelsea in their penultimate game of the season on Wednesday.

Laurent Depoitre sent Huddersfield into the lead five minutes into the second half and goalkeeper Jonas Lossl made vital saves to secure the point after Marcos Alonso fortuitously leveled for Chelsea.

With Newcastle and Brighton already safe, all three promoted teams have avoided relegation this season.

As players and fans of Huddersfield, including actor Patrick Stewart, celebrated at Stamford Bridge, Chelsea players watched on gloomily. After being dethroned by Manchester City as champions, Chelsea is scrapping to make the top four and qualify for the Champions League on the final day on Sunday.

Chelsea, which plays at Newcastle, is two points behind fourth-place Liverpool, which hosts Brighton