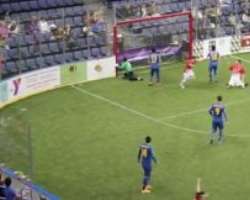 The WMF has no link with the Federation of International Football Association (FIFA), which organises football, including five-aside.

Andy Elerewe, president of Minifootball Association of Nigeria (MAN), announced the membership on Tuesday in Abuja.

He spoke at a send-off dinner organised for its football team “The Jaguar.”

Elerewe said that the country joined WMF to enable her participate in the African Minifootball Cup, scheduled to hold in Tripoli, Libya, between May 5 and May 12.

Elerewe said the association assembled its team to the African championship after four days of its affiliation to the world body.

“I can proudly tell you all that we have successfully completed our registration with CAC, and just four days, Nigeria was officially accepted and affiliated by the World Minifootball Federation (WMF) at its Extraordinary General Assembly of April 27, 2018.

“So, I can authoritatively inform you that we are now one of the 144 countries that are duly accredited and affiliated to the WMF, whose membership cuts across the six continents of the world.

“The Africa Minifootball Cup tournament taking place in Tripoli, Libya, from May 5 to May 12, 2018 will have nine countries officially accredited for it and attending,” Elerewe said.

According to him, 11 players will represent the country at the tournament which is a six-aside football game.

“Ladies and gentlemen, Minifootball is the new craze in global sports. Though, it's as old as the regular football, the sport became an officially organised international sporting game under the auspices of the WMF in 2013.

“Minifootball is a six-aside bears football game, played out-door on a natural or artificial grass, with only nine players (six in play), smaller goal post and a smaller field of about (46mx26m), and 30 minutes duration each half with a 10 minutes break.

“Already the sport which has continued to dominate the attention of the world is officially recognised in over 140 countries; since it held its first Minifootball World Cup in nine cities in the United States of America in 2015, there has not been a going back.

“Tunisia hosted the 2017 world edition,” he added.
Justine Madugu, head coach of the minifootball team, “The Jaguar,” assured Nigerians that the team would do its best to win the tournament in spite being a participant for the first time.

Madugu said plans were on to establish standard local leagues in the country as mandated by the world body.

He said that the local leagues were expected to translate into a continental championship with an opportunity for clubs to compete at the world stage.

“The Minifootball World Cup and the continental championships are organised bi-yearly,” Madugu said.

The News Agency of Nigeria (NAN) reports that a cheque of N30 million was issued to the association by AIBEN Investment and Property Limited for the sponsorship of the team to the tournament in Libya.

The WMF has its headquarters in Czech Republic, while the African Minifootball Federation (AMF) has its head office in Tunisia.