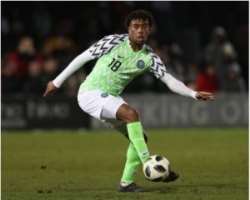 Nigeria manager Gernot Rohr has slammed Alex Iwobi's performance in the  Super Eagles' 2-0 defeat to  a disciplined Serbia in a pre-World Cup preparatory affair in London on Tuesday, criticising the Arsenal forward for showboating in the encounter.

Three-time African champions Nigeria, who defeated  Poland 1-0  in a friendly in Wroclaw on Friday,  were punished  for their defensive mistakes by Fulham  striker  Aleksandar Mitrovic, who scored the two second-half goals for  his  Russia 2018 World Cup-bound side.

The Eagles take on Congo in Abuja or Uyo on May 28, travel to London to face  England at Wembley  on June 2 and  Czech Republic on June 6 before the World Cup kicks off on  June 14.

The 21-year-old's showmanship  slowed down  Nigeria's attack after dropping into a midfield role in the second half.

“With us all the time he's very good, already in Poland (where Nigeria won 1-0) and he was fantastic,” Rohr was quoted by  Standard Sport as saying on Wednesday.

“Perhaps some times (he did) a little too much individually, he wanted to make a show. We prefer collective football.”

The 64-year-old former Gabon coach added, “But when he can eliminate his opponent it's very good (for us). He's with us all the time in confidence. He's free when he has the ball.

“I don't know what the tactical options of Arsene Wenger are when he's with Arsenal but with us he's free offensively and he can show all his qualities.”

Meanwhile, Nigeria captain Mikel Obi and defender William Troost-Ekong say they have put the London defeat behind them and focused on Nigeria's future  games.

China-based midfielder Mikel missed both the Poland and Serbia fixtures due to his work permit issue in the Asian nation.

“You don't lose, you learn. Looking forward to being back on the pitch for our remaining preparation games #SoarSuperEagles,” the former Chelsea star wrote on his Twitter page on Wednesday.

Bursaspor star Troost-Ekong  wrote on Twitter, “End of a good camp with the Super Eagles. We keep working and improving. Thanks everyone for your support.”