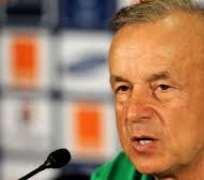 Super Eagles of Nigeria are set to take on Serbia in an International Friendly match tonight in London.

Nigeria won 1-0 in their last friendly match against Poland in Wroclaw, the team will hope to continue their rich vein of form after winning their last two international friendly matches against Argentina and Poland respectively.

Kelechi Iheanacho has been ruled out of the encounter after suffering a minor foot injury, Shehu Abdullahi too will miss the match due to an undisclosed injury.

Captain, John Obi Mikel is also out having failed to sort out his work permit issues, he also missed the match against Poland due to the same reason.

Rohr also revealed that Chippa United goalkeeper, Daniel Akpeyi is out of the encounter due to visa hitches.

“One of our goalkeepers (Akpeyi) had a problem with entry visa but so far I’m pleased with the two we have here. Ezenwa and Uzoho,” Rohr said.

“At the moment I’m satisfied with the young one (Uzoho). Before he arrived we were a young team and he’s here now and it’s good for the future.

“Other players in the team are helping him to do well in terms of positioning during corners.”

On the game, Rohr added: “The result is not the most important thing for us. It’s what we can see, learn and what the players can do. The players need competition and I think they are getting it.”

Similarly, Super Eagles Captain, John Obi Mikel has waxed lyrical about the team's progress this year, he has also assured the team of his support tonight.

“I’m excited to see how far we can go as a team this year. Tonight is another step on that journey. I’m with you tonight. #soarsupereagles,”Mikel wrote on his Twitter handle.

The match will be televised by Supersports on DSTV and GOTV.