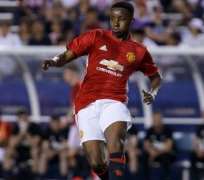 Manchester United have blocked teenage sensation Tosin Kehinde, who is seeking to dump England for Nigeria, from honouring coach Gernot Rohr's invitation to train with the Super Eagles.

Rohr's squad is currently in London, preparing for Tuesday's international friendly against Serbia.

According to reports, Kehinde was invited to train with the team after a meeting  with the first vice president of the Nigeria Football Federation ( NFF), Shehu Dikko, alongside his parents.

However, United has kicked against the idea and the midfielder who plays for their Premier League 2 side, has been ordered back to Manchester.

The English Club pulled him out of training with the Super Eagles, as they need him to resume training today ahead of preparations for their Premier League 2 game on Tuesday.

Kehinde would have been allowed to stay with the Nigerian team if he was formally invited. Reports also indicate that Kehinde has chosen to represent the Super Eagles of Nigeria over England.

19-year-old Tosin was given birth to in Lagos but is eligible to play for England.

Tosin has turned out for Manchester United at several age-grade levels and is currently with the U-23 side.

He has been called up by Jose Mourinho to the first team set up but is yet to make an appearance for the senior side.

According to several reports after a meeting with Super Eagles head coach Gernot Rohr, and Nigerian Football Federation (NFF) vice presidents Shehu Dikko and Seyi Akinwunmi the youngster has decided to pledge his allegiance to Nigeria.