John Terry has been a big loss to Chelsea, concedes Antonio Conte 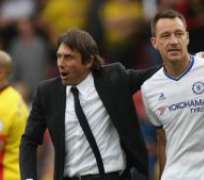 The central defender made just nine league appearances in his final year at Chelsea but provided valuable off-field support to Conte as the Italian led the west London club to the title.

Terry paid a visit to Chelsea’s training ground in Cobham this week to try to lift morale with the club having lost four of their last five league games to sit fifth in the table.

“For us it was a big loss,” Conte said of the former England captain.

“I tried to keep him for another season but he wanted to play and I understood this. I wished him the best and for his family.

“JT’s role last season was incredible. He didn’t play a lot of games but despite this his commitment was incredible, he helped me a lot. We are talking about a player with great experience.

“For John, Chelsea is home and he can come when he wants, the doors are open for him and for [all] the players that write the history of this club.

“For me, it’s always a pleasure to see him and have a chat. It’s right also for the players to see him again, [he’s] their old captain.”