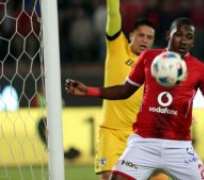 With Gernot Rohr set to name Nigeria’s first pre-World Cup squad on Tuesday, Junior Ajayi has emerged himself as a contender for the Super Eagles’ 23-man selection.

Sources have told KweséESPN that Ajayi will be one of the names on the German’s list, and it would be a more than deserving reward for a player who was denied the opportunity to make his mark at the Olympics two years ago.

Injury limited the 22-year-old to a grand total of 31 minutes as the Dream Team overcame shambolic preparations to claim bronze at the 2016 Games in Rio de Janeiro.

Prior to that, his two goals and energetic play had helped Nigeria claim the African U-23 title in Senegal, although he was denied the chance to build on that success in Brazil.

Since joining the Egyptian giants from Tunisia’s CS Sfaxien, Ajayi has helped them win the league, Cup and Super Cup as well as secure a second pace finish in the CAF Champions League.

This current season he has scored eight goals and weighed in with nine assists from 23 games as Ahly edge inexorably closer to a second consecutive title.

While competition for striking places for the Nigeria World Cup squad is intense, none of the current forwards has exactly made himself indispensable, and the former youth international potentially has an ideal opportunity to dislodge one of the more established stars.

Mohamed Mostafa/NurPhoto via Getty Images)
Ajayi’s bulldozing, energetic style could be just what Rohr is looking for, and the manager’s willingness to consider the youngster suggests that he’s looking to improve his core unit of strikers – Odion Ighalo, Kelechi Iheanacho and Alex Iwobi.

Ighalo is just beginning the new Chinese Super League season, Iheanacho has found games – and goals – hard to come by at Leicester City, while Alex Iwobi’s form has dipped in recent weeks.

Could Ajayi be the solution?
The attacker’s story comes in sharp contrast to Kelechi Osunwa, who, just over a year ago, was smashing and setting scoring records in Sudan.

However, Rohr didn’t rate the quality of opponents faced by Al-Merrikh, and when asked about Osunwa, told KweséESPN that the forward would need to replicate the same goalscoring form in a more testing league.

Age could also have played a factor in Rohr’s Osunwa snub. The forward had already crossed into the wrong side of 30 at the time when the question of his international future was put to the German coach.

At 22, the Ahly striker fits perfectly into Rohr’s unofficial age bracket for the team he is currently building, and may yet find himself on the plane to Russia as the Super Eagles’ trump card come June.