After awful weekend, Chelsea and Arsenal set to miss out in EPL's top-four race 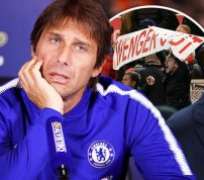 It is looking increasingly likely that Chelsea and Arsenal will be the teams from the Premier League’s “Big Six” to miss out on Champions League qualification this season.

Arsenal is eight points further back in sixth after a 2-1 loss at Brighton that capped a miserable 10 days for the London club, during which it lost four straight games across three competitions. Arsenal hasn’t lost four matches in a row since 2002.

Two big-name managers were going to have their reputations damaged this season by missing out on the top four. Arsenal’s Arsene Wenger might have been predicted, but surely not Chelsea’s Antonio Conte.

Chelsea finished 15 points ahead of City last season in romping to the league title. Ten months later, City is 25 points clear of the soon-to-be-deposed champions.

The gulf in class between the two teams was stark at Etihad Stadium, with City enjoying 78 percent possession in a first half when Chelsea didn’t have a shot on or off target.

Chelsea got through that, only to concede within 33 seconds of the second half when David Silva crossed for Bernardo Silva to force in a finish at the far post.

City needs 12 more points to win the league, meaning it could yet be clinched at home to Manchester United on April 7.

Arsenal conceded twice in the first 26 minutes at Brighton, both following errors by goalkeeper Petr Cech. Lewis Dunk and Glenn Murray were the gleeful recipients.

“It is very difficult, nearly impossible now,” Wenger said of Arsenal’s top-four chances, “we are too far behind. We need two teams to collapse, not one.”

Chelsea player ratings
Chelsea fell to their second consecutive defeat after meekly surrendering 1-0 to Manchester City at the Etihad Stadium.

The visitors clearly set up to contain the runaway leaders of the Premier League which they did successfully in the first half. Nevertheless, the total lack of attacking ambition combined with some dreadful passing meant that the Blues continually found themselves on the back foot. While Chelsea were not doing themselves any favours, they were not helped by the extraordinary decision not to send off Oleksandr Zinchenko for a late, reckless, high, out of control tackle on Victor Moses.

With the score 0-0 at half-time, Antonio Conte could perhaps have suggested vindication for his team’s negative outlook, but that all unravelled inside a minute of the second half. A weak clearance from Andreas Christensen fell to David Silva whose cross caught Marcos Alonso dawding and allowed Bernardo Silva to score the decisive goal. Moses had a glorious chance to pull his team level when he sliced his shot wide, though that was as threatening as Chelsea got until the last seconds when Marcos Alonso fired a volley just wide.

Positives
The defensive shape was solid and restricted Man City to just two genuine sights of goal. Nothing else to write home about.

Negatives
The lack of adventure was startling but even worse was the distribution on the rare occasions that Chelsea’s players actually attempted to get forward. It is hard to remember the last time that this side was so wasteful in possession with nobody exempt from blame with the arguable exception of the isolated Eden Hazard.

Manager rating out of 10
3 — There is nothing wrong in Conte adopting a defensive approach away at such a strong side especially with N’Golo Kante missing through illness and the thought was probably to mirror the recent stirring display against Barcelona. But the bizarre difference here was a failure to show any attacking intent whatsoever, making the decision not to play a target man utterly mystifying. Perhaps most damaging of all was an apparent acceptance on the sidelines of the team’s lack of adventure with the score at 1-0.

Player ratings (1-10, 10=best; players introduced after 70 minutes get no rating)

GK Thibaut Courtois, 7 — Was left stranded for the goal with Silva’s shinned finish bouncing awkwardly over him. Otherwise, reasonably comfortable.

DF Cesar Azpilicueta, 7 — Was defensively solid as he led the rearguard action. Made one sensational goal-line clearance after Leroy Sane’s fierce strike seemed destined for the bottom corner.

DF Andreas Christensen, 5 — The talented youngster is enduring a tough spell at the moment with each mistake seemingly ending in a goal. Distribution was below his usual standard.

DF Antonio Rudiger, 6 — From a purely defensive point of view, the Germany international was excellent, one instance of tracking and dispossessing Kevin De Bruyne indicative of his display. Unfortunately, his passing was utterly dreadful with umpteen aimless balls forward instantly ceding possession.

MF Marcos Alonso, 5 — Although largely assured, he switched off at the crucial moment to allow Silva to steal in for the winner. The team’s inhibitions meant that little was seen from him in an attacking vein.

MF Victor Moses, 5 — Was always going to have his hands full with the dynamic Sane and duly found himself pulled in all directions. Wasted a fantastic chance to equalise with the far post gaping.

MF Danny Drinkwater, 5 — Although defensively diligent, he struggled on the ball with Man City suffocating the space. Was marginally better after half-time without any decisive contributions.

MF Cesc Fabregas, 4 — Needed to be right on his game if Chelsea were to have any success but he surprisingly fell woefully short of the required standard. Showed very little bravery on the ball and lacked any precision in his passes, a combination that kept his teammates under pressure.

FW Pedro Rodriguez, 3 — His energy and commitment can never be doubted but his total inability to find a teammate with the simplest of passes saw a host of promising attacks butchered before they could evolve into anything meaningful. It was a miracle that he lasted 82 minutes before being substituted.

FW Willian, 6 — Always looked like Chelsea’s most likely route to goal with his strong running and tendency to look forward rather than back. Yet even he found his passing radar askew at the key moments to thwart any promise.

FW Eden Hazard, 5 — A completely peripheral figure as the central striker through no fault of his own. Spent more time staring at the sky in frustration than with the ball at his feet. After such a thankless task, he could be forgiven for wondering if his wondrous talents would be more valued elsewhere.

Substitutes
FW, Olivier Giroud, NR — Brought on far too late to have any impact though he did show what the team was missing by winning a couple of aerial challenges.