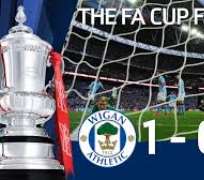 League One Leaders, Wigan Athletic beat Manchester City 1-0 at the DW Stadium to send Mega-Rich City out of the Emirates FA Cup.

The Latics showed character and resilience to frustrate City who dominated possession from start to finish.

Fabian Delph was sent off on the stroke of half-time for a heavy challenge on Max Power.

Will Grigg is the highest goal scorer in the competition after scoring his 7th goal against City.

Man City will turn their attention to the league cup final against Arsenal after their quadruple dream has been shattered by Wigan.

Wigan Manager, Paul Cook could not hide his excitement after his side shock win against City

"It feels great. It's such a severe test. They're such a strong side and move the ball so well. We had to ride our luck at times and the sending-off is always a big incident.

"Our lads deserve credit for their work. Some of the blocks they made were outstanding and to beat Man City you have to do that."