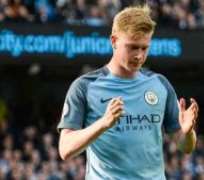 Kevin De Bruyne has signed a new five-year contract with Manchester City that will tie him down until 2023, the Premier League club announced Monday.

De Bruyne’s previous deal was not due to expire until 2021, but his increasing importance to Pep Guardiola’s side has encouraged City to offer him fresh terms.

“As I've said previously, my intention has always been to stay here at City, where I've felt at home from day one,”  De Bruyne told CityTV .

“Not only are we winning – we are playing great football. It's a pleasure to be a part of and I'm really excited about what we can achieve in the coming years.”The Belgium international signed from Wolfsburg in August 2015 for a reported £55 million and has since established himself as one of the most important figures at the Etihad Stadium.

De Bruyne led the Premier League with 18 assists last season, a number he could well replicate this term having managed 10 in 24 top-flight matches. He has also scored six goals this term, one off his previous Premier League high with the club of seven, set in 2015-16.

The playmaker had  previously hinted his desire to ink fresh terms with the club  and City’s director of football Txiki Begiristain is pleased to have concluded the deal.

“He has shown this season how important he is to the team and has been integral in everything we’ve done so far.

“We are thrilled he has committed his long-term future to Manchester City.”

De Bruyne won the EFL Cup with City in his first season at the club in 2015-16 and looks set to earn a Premier League crown this year with City 12 points clear of second place local rivals Manchester United.