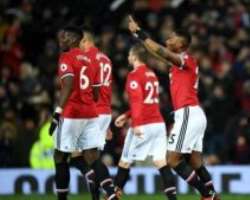 The Red Devils took their chances and held Stoke City at bay.

Manchester United was clinical as they dispatched Stoke City with ease at Old Trafford 3-0 on Monday. Antonio Valencia started things less than 10 minutes in, while  Anthony Martial  and  Romelu Lukaku  were the men to see the scoreline out.

The Red Devils opened the scoring in the ninth minute when Valencia received the ball at the top of the box on a square pass from  Paul Pogba , and he cut into the box and to his left to create space, and when the incoming defender over-committed, he belted a curler inside the far post, leaving  Jack Butland  with no chance. The goal is Valencia's first since December 2nd, coming on his return to action from a hamstring injury suffered against West Brom in mid-December.

[ MORE:  What to do with the emaciated Arsenal squad  ]

Xherdan Shaqiri  tried an audacious overhead effort minutes later hoping to get Stoke City back on level terms, but his shot was weak and straight at David de Gea from a tight angle.  Steven Ireland  came inches from tying things back up on 21 minutes, but as he unleashed his effort from the penalty spot with space to shoot, he slipped on the wet surface and yanked it wide left.

After Ireland's miss, Stoke became the more attacking team, and it put Manchester United on its heels for a period of time as they were sloppy in possession. They failed to capitalize, and by the 35-minute mark, the hosts were back on top, and profited.

In the 38th minute, Romelu Lukaku used his strength on the right edge to get the ball centrally for Pogba, who cut left for Anthony Martial. The 22-year-old hit the ball first-time, and ripped it into the top corner just past the fingertips of a diving Butland.

On the stroke of halftime Shaqiri forced an important save from David de Gea down to his left off a volley, but the Spaniard was there to keep the two-goal lead intact. In the second half, United had a few half-chances early on. Martial nearly had a second just before the hour mark, but Butland smothered the chance on the doorstep.  Juan Mata  pulled the trigger two minutes later and fired just wide of the far post, and then again rifled over soon after.

Lukaku put the game away with 18 minutes to go as he received the ball from Martial with his back to goal and turned past two defenders and slid the ball into the bottom corner for a 3-0 lead. The win puts Manchester United clear into second place, three points above Liverpool and twelve behind Manchester City, who lost for the first time this season last time out. Stoke City, meanwhile, will hand the reigns to  Paul Lambert  who was in attendance for today's game, taking over for the fired  Mark Hughes .