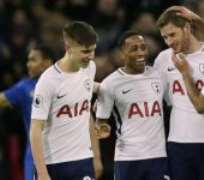 Manchester United and Tottenham will play away at fourth-tier clubs in the fourth round of the FA Cup.

United was drawn on Monday to face Yeovil in southwest England for the second time in four seasons. The 12-time cup winners won 2-0 on the 2015 trip in the third round.

Tottenham will go to south Wales to play Newport in just under three weeks.

English Premier League leader Manchester City could also be playing at a League Two side if Mansfield beats Cardiff of the second tier in a replay.

If Chelsea beats Norwich in a replay, the Premier League champion will play Newcastle.

Nottingham Forest’s reward for eliminating holder Arsenal is an away game against fellow second-tier side Hull, which lost the 2014 final to the Gunners. Coventry, the 1987 cup winner who is in the fourth tier, will play MK Dons after ousting Premier League struggler Stoke.

Another shock in the third round saw Leicester held by Fleetwood to 0-0. The replay winner plays Fleetwood’s fellow third-tier side, Peterborough.

Fourth round draw:
Bournemouth/Wigan vs. Shrewsbury/West Ham
Cardiff/Mansfield vs. Manchester City
Carlisle/Sheffield Wednesday vs. Stevenage/Reading
Huddersfield vs. Birmingham
Hull vs. Nottingham Forest
Liverpool vs. West Bromwich
Middlesbrough vs. Brighton
Millwall vs. Rochdale
MK Dons vs. Coventry
Newport vs. Tottenham
Norwich/Chelsea vs. Newcastle
Notts County vs. Wolves/Swansea
Peterborough vs. Fleetwood/Leicester
Sheffield United vs. Preston
Southampton vs. Watford
Yeovil vs. Manchester United
Matches to be played over Jan. 26-29