Wenger, Arsenal come under fire after crashing out of FA Cup 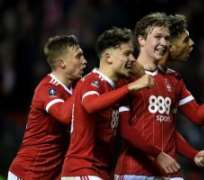 It was a day for the ages for Nottingham Forest, and for that reason  Arsene Wenger  is in hot water once again with his club's fanbase.

Arsenal fell 4-2 to Championship side Nottingham on Sunday, leaving the Gunners to fall out of this year's FA Cup competition in the third round — the earliest a Wenger side has ever lost.

The French manager, who sat in the stands for the match as part of his FA sanctions, made nine changes coming into the clash against Forest, including the absences of Alexis Sanchez and Mesut Ozil.

“We had a very difficult schedule, many players were on the edge and we play again on Wednesday,” Wenger said post match. “It was nearly impossible not to make [changes]. I can understand that the selection is questioned, but it would also be a little bit of an easy excuse because we had eight or nine experienced international players on the pitch today. Even against a Championship team, we played with all the respect and that would be the wrong excuse.”

Arsenal's inconsistency has been a trend throughout this season though, with the club currently boasting just two wins in their last eight Premier League matches. The Gunners sit sixth in the league table, 23 points off the pace set by league leaders Manchester City.

There's no questioning that the change in lineups affected the flow of the team's play, particularly in the attack, which managed just four shots on target throughout the match.

“I wouldn't like to talk about the individual performances today because it's disappointing that we lost the game,” Wenger told the media. “That's all I can say. There are some days where you have to say, 'Nottingham Forest were better than us'. Unfortunately that was the case. Of course that was disappointing and on top of that we have another big game on Wednesday. We have to focus on that now.”

Overall, Wenger was quite disappointed by the result, particularly given Arsenal's success in the competition over recent years.