Chelsea don't fear draw with Barcelona or PSG in round of 16: Conte 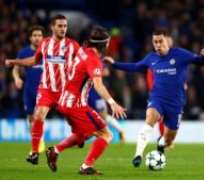 Antonio Conte and Eden Hazard insist Chelsea fear no one with Barcelona and Paris Saint-Germain possible opponents in the first knockout round of the Champions League.

A 1-1 draw with Atletico Madrid saw the Spaniards eliminated and the Blues finish as Group C runners-up to Roma on head to head records.

Finishing second means, as it stands, Chelsea could on Monday be drawn to face Lionel Messi’s Barca, Neymar’s PSG or Turkish side Besiktas in the last-16.

They cannot face another English club and Manchester City, United and Tottenham have won their groups, while Liverpool lead theirs ahead of Wednesday’s final group game.

“Our opponent won’t be happy to play against us.”

Hazard was similarly unafraid, telling BT Sport Football: “It’s not a problem. We are Chelsea. We can face any team.

“We know PSG and Barcelona, they are very good. But we are Chelsea and we have to be ready for everything. We can do everything.”

Conte thinks the strength in depth of the Premier League makes it difficult for English teams, who have not won the European Cup since Chelsea did so in 2012.

“To go with five teams to go through to the next round means the level of this league is very high,” Conte added.

“Don’t forget here this season is very tough. You have to play a lot of games, but when you arrive at the final stage to play for quarterfinals, semifinals the English teams have a lot of games in their legs. For this reason I think it could be problematic to win.”

Conte suggested the other English teams had more straightforward groups in the Champions League — “not simple, but easy,” he said — and that was perhaps proven by the elimination of Atletico.

Roma’s 1-0 win over Qarabag means Los Rojiblancos and former Chelsea striker Diego Costa will play Europa League football in 2018. The Blues were already through but needed a win to secure top spot.

Substitute Willian might have won it for Chelsea, who instead had to settle for a draw.

“We deserved to win the game,” Conte added. “When you create so many chances to score, but important chances, not simple chances, you have to try to take them. We could be more accurate.”