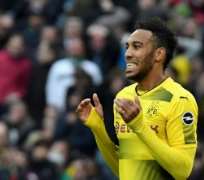 With the January window on the horizon, there’s plenty brewing in the transfer market. All the latest deals and potential deals can be found here . Chelsea linked as Auba ‘set for Prem switch’

The Mirror says he is , reporting that Chelsea are “among a number of clubs” to have been told he will be available in the winter window.

It adds that Dortmund will sell Gabon international Aubameyang after deciding they have “had enough” following a campaign “peppered with controversy,” despite his prolific strike rate of 17 goals in 19 matches so far.

Aubameyang was sent off in the dramatic derby draw with Schalke and was also suspended for unspecified disciplinary reasons earlier this month.

The Mirror says Chelsea boss Antonio Conte wants to add to his options up front and could now move for the Dortmund star.

Meanwhile, speculation linking Real Madrid with keeper Thibaut Courtois never quite seems to go away, and the Telegraph reports that the Blues will step up talks over a new contract.

Courtois has less than two years left on his current deal but has indicated that he is content to leave the talking until the end of the season.

But the Telegraph says that has led to fears that “he is willing to run his current deal down” and “sparked renewed interest from Madrid,” with Paris Saint-Germain and Juventus also waiting in the wings.

United look leftwards for summer spree
Manchester United want to sign four big-name left-footed players in a transfer push that could cost more than £200 million, according to the Manchester Evening News .

It says manager Jose Mourinho “will attempt to address their lopsided attack” in a major revamp at the end of the season.

But the Evening News stresses that any chance of landing all four would mean United having to “gazump their £152 million record splurge, presided over by Louis van Gaal in 2014.” Hammers eye swoop for striker Fyodor Smolov

New West Ham boss David Moyes wants to beef up his attacking options as he tries to lift them clear of danger.

The Mail reports that the Hammers “are ready to step up their interest” in Krasnodar’s Fyodor Smolov in an effort to do just that.

Russia international Smolov would cost around £15m, the Mail says, but West Ham could face competition from both Schalke and Bayer Leverkusen.

If Smolov does arrive at the London Stadium he is likely to have company, with Moyes also eager to bring in both a midfielder and a defender. Tap-ins

– The way things are going Everton could do with a touch of inspiration, and the Liverpool Echo reports that they could find it in the shape of “a Turkish playmaker once compared to Zinedine Zidane.”

Citing reports in Turkey, the Echo says Oguzhan Ozyakup of Besiktas is being tracked after an impressive run of form for the Turkish champions.

– Talking of Turkish teams, Fenerbahce might be in the market for Stoke City defender Erik Pieters , according to the Sentinel .

It reports that the Turkish club are eyeing up a move for the Potters’ left-back, having also been linked with Chelsea’s Baba Rahman .