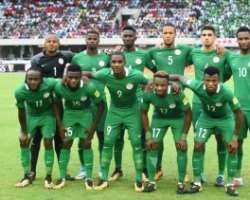 Nigeria have dropped nine places in Fifa’s latest World Ranking, despite defeating Argentina 4-2 in an international friendly in Krasnodar.

Before silencing La Abiceleste, the Super Eagles played a 1-1 draw against Algeria in their last World Cup qualifying encounter. Even at this, the three-time African champions moved southward in the grading.

Aside being top-ranked African nation, the Lions of Teranga are 23rd in the world- their highest-ever position on the global ladder – on the back of securing a first World Cup place since 2002.

Germany, Brazil, Portugal, Argentina and Belgium remained unmoved as the top five teams in the world, and they will be heading to the 2018 Fifa World Cup.

The next Fifa/Coca-Cola World Ranking will be published on 21 December 2.