Chelsea: Willian hugs his way out of transfer rumour STORM 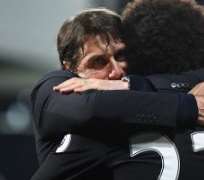 Veteran winger Willian — he's 29, before you ask — has been increasingly the subject of transfer rumors, with many expecting him to leave Chelsea even as he closes in on 200 appearances for the club and has just completed the two most proficient seasons of his career with 23 goals total. In fact, two years ago, he was voted Chelsea Player of the Year by virtue of being the only player who didn't allow his levels to drop drastically after winning the 2014-15 title and revealing himself to be a free kick master.

He started last season as one of Conte's first-choice eleven, but lost his spot to Pedro largely through circumstance. It was the first time since his arrival in 2013 that Willian wasn't first-choice on the right wing, but he still played a key role in Conte's title win with a fourth straight season of 40+ appearances. And while he's not a starter this season either (neither is Pedro in what looks like the new standard 3-5-2), Willian has played in every single game except one, the League Cup win over Nottingham Forest.

But the fact that Willian has only started 3 of the 11 games since that Forest win is probably what's fueling the rumors — if we ignore the more ethno-centric rumors of the Costa-David Luiz-Willian trio getting axed one by one — which include many of the usual suspects around Europe, China (that still a thing?), as well as back home in Brazil.

It's the latter nonsense that caught Willian's eye earlier today and compelled him to actually respond to two different journalists on Twitter in a rather adorable way, both of whom were claiming that he's negotiating with Palmeiras over a transfer for next season.

What makes Willian's denials fantastic is the amusingly polite tone, and that he ends them by sending hugs to the clickbaiters.

Hello Sandro, everything all right? Sorry, but I’m not negotiating with Palmeiras and my agent has received no contact from the Club. I have no plans to return to Brazil right now. Hugs!

Hi Juca, everything all right? Sorry, but I don’t have the goal of returning to Brazil and I or my representative never spoke with anyone. This is nothing but speculation. Big hugs!

Willian will have two years left on his contract after this season, which could prompt some transfer activity. He will turn 30 next summer and may not be satisfied with a backup or rotational role just yet; meanwhile Chelsea could still collect a decent transfer fee at that point. But Willian has also spoken many times of his happiness at Chelsea and how he wouldn't mind seeing out the rest of his career at the club. He rejected a reunion with Mourinho and Manchester United just six months ago.

Circumstance and opinions and plans do change however and you never truly know in football, but for now, Willian isn't going anywhere. And that's just fine by us.