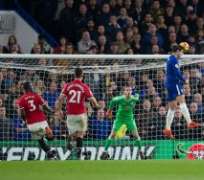 At the final whistle Antonio Conte punched the air with delight, turning around to Chelsea's fans and saluting them in the cold, dark west London night.

Then, there weren't quite fireworks as is commonplace on November 5th in England, but another fiery torch had been added to the slowly simmering Bonfire ignited by Jose Mourinho last season.

Following Chelsea's 4-0 shellacking of United in the Premier League last October, Mourinho took exception to Conte celebrating N’Golo Kante 's fourth goal wildly and had a word with Conte at the final whistle.

This season there was no time for that as Conte ran straight onto the pitch at the final whistle and celebrated with his players as Mourinho stood on the sidelines waiting for the Italian coach to return. He didn't.

Speaking after the game, Mourinho said he had no problem with Conte not shaking his hand.

“You want me to go and chase him on the middle of pitch?” Mourinho said. “I was there. I shook hands with the people that were there. I think one of them was his brother, his assistant, so I feel that by shaking the hands of his brother and the other assistants, I feel that I did my duty. I cannot go and run to chase him. He [Conte] doesn't have to wait. There is no problem with this at all.”

Conte did not wait for Mourinho in the tunnel after the game to shake his hand either and the simmering rivalry between the current Chelsea boss and the former Blues manager is obvious.

“It's not important,” Conte told Sky Sports afterwards. “It's important to win the game. You have to have the respect on the pitch, not outside the pitch.”

Conte then told the media in his press conference that he “shook hands two times” with Mourinho and that “I think that's enough” before weighing in on Mourinho saying that United will be a different team in November and December when Paul Pogba , Zlatan Ibrahimovic and Marcos Rojo return from injury.

“When you have 24 players in your squad, if you have one, two or three injuries it doesn't work,” Conte said. “The problem is when you don't have 23 or 24 players in the squad. Then it is totally different.”

Injuries aside, Chelsea got the better of their former manager on the pitch once again as Mourinho's pragmatic approach succumbed to an Alvaro Morata header in the second half to give Chelsea all three points.

Mourinho didn't think his team deserved to lose the game

“We had chances to equalize, which I think would be a fair result,” Mourinho said. “But this is not about what I think it is. This isn't even about what I think is fair or is not fair. It is about the pragmatism of the result. One goal. Three points. Congratulations.”

In truth, Manchester City were the big winners as they're now eight points clear atop the Premier League table heading into the international break.

With United in second place on 23 points, they are level with third-place Tottenham and Chelsea, despite all of their early season struggles, are just one point behind in fourth. Mourinho said they are “worried” about the gap to Man City but said they are “18 teams more worried than us” and said that City's lead in the Premier League is not the same as it is in the Bundesliga or La Liga.

We didn't see fireworks on the sidelines at Stamford Bridge on Bonfire night but Conte's actions will surely light a fire under Mourinho which will simmer until the two clubs meet again at Old Trafford on Feb. 24, 2018.